Fell’s Point is one of the oldest neighbourhoods in Baltimore. It was once a lively shipbuilding port. The appearance of the neighbourhood has not changed significantly since its inception. 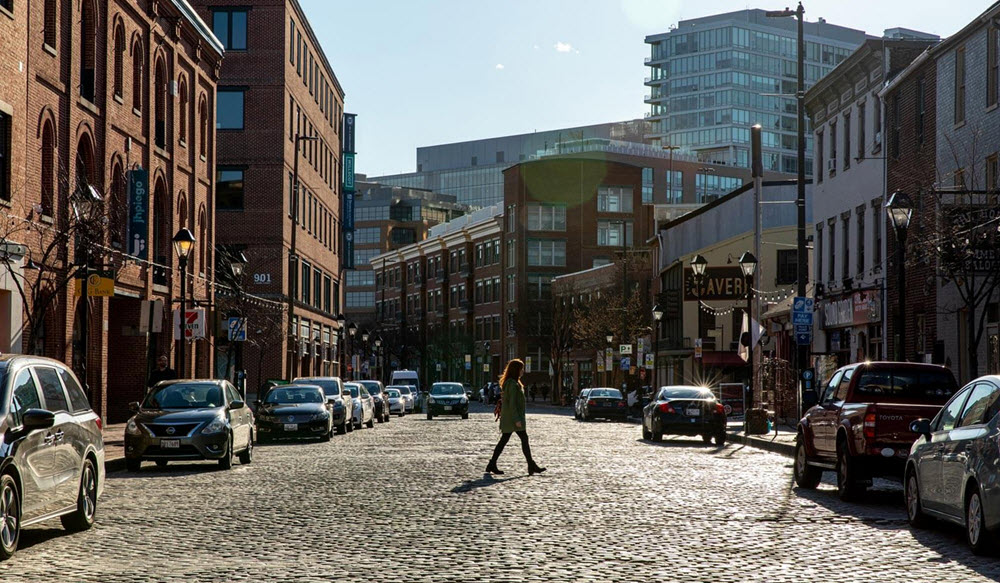 The Fells Point neighbourhood of Baltimore has Belgian block streets. The bricks came from Europe with large merchant ships. The area is walkable, and there are many things to see and do there.

Broadway Market is an indoor market built in 1786 and active all year round. There you can get both international delicacies and local treats. This charming neighborhood is listed on the National Register of Historic Places. Fell’s Point was founded in 1763. It has more than 300 buildings in the National Register, including the oldest standing residence in Baltimore City, the Robert Long House.

The house is open to the public and it is possible to book a tour. Fell’s Points had the first African-American-owned shipyard in the country. You can visit the Frederick Douglass-Isaac Myers Maritime Park Museum to find out more about it. The city’s oldest bar, The Horse You Came In On Saloon, is a well-visited place as it has a reputation for being Edgar Allan Poe’s last stop before he mysteriously died.

The neighbourhood consists of restaurants down by the water, and not far from the Inner Harbor are small cosy shops.

In Fell’s point, several annual festivals and events are held.

During Fell’s Point Private Festival, historic ships, interactive demonstrations, maritime stalls, live music and more activities for children are displayed. It is free of charge and everyone is welcome during the month of July when the event is held.

Fell’s Points Fun Festival started in 1967 and is really, as the name suggests, fun. It started as a fundraiser to preserve the neighbourhood. It offers music, sales and fun activities for the whole family.

It is held annually in October.

Fell’s Point Olde Tyme Christmas Festival is held every year in December as a foretaste of Christmas. It is held for a whole day and begins with breakfast with St. Nod. The day continues in the same Christmas spirit with Christmas lights, Christmas songs and other Christmas-related activities.

Fell’s Point’s focus is on the square and its building from the 18th century, which today houses shops and restaurants. You can walk around on your own or go on guided tours and ghost walks.

Several historic pubs serve beer and drinks and you can also learn a little about the district’s history if you end up next to a local.

A guided group hike in the Fell’s Point water district can offer a 3.5 long experience of Chesapeake Bay cuisine. Guides who talk about the city’s history and architecture as well as tastings of four restaurants and finally a drink in the fifth place.

There are plenty of restaurants and pubs in the area.

Fell’s Points’ colonial past is still very much present. The colonial style of the district is well preserved, and the city’s old port and manufacturing centre create a charming atmosphere.